I’m very happy to be writing this report. So much so, that I started it the day I got back from our weekend event, after getting home with a head full of fresh ideas and enthusiasm. Not only was it a lively and fun event for established Esperantists, there were also quite a few new faces, and during our annual general meeting we even had some new committee members join! The event took place in London, from the 25th to the 27th of May, with 17 people in attendance.

Slide from my talk

The event started on Friday at the London Esperanto Club. Sophie Horrocks gave a talk about various youth Espernato events taking place this year and then I, Ariel Bonkorpa, gave a talk about the various ways to become active in the Esperanto community, whether through art, arranging events, teaching, along with tips on how to effectively and sustainably do it.

Then there was a talk by John Wells about his history as an Esperantist, to ‘show the young people the older Esperantists’ side of the story’. The talk was very interesting, and for me as a (fairly) young person, it was fascinating to hear stories of what it was like to take part in Esperanto events before the Internet, when you couldn’t just fly over and had to go on complex train journeys to get to a universal congress! 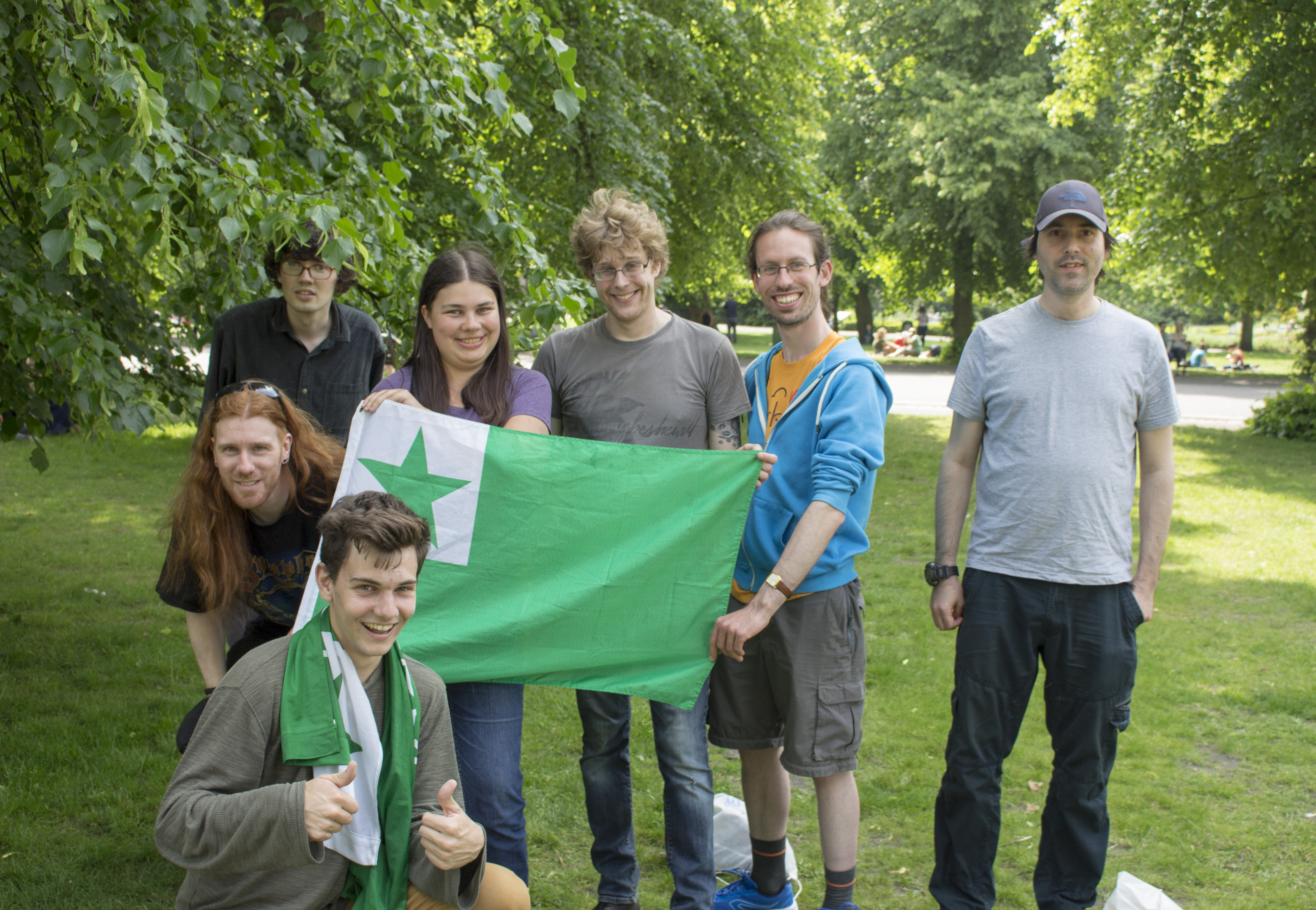 Photo of the picnic

On Saturday we went to Greenwich Park for a picnic, and thankfully we had beautiful, sunny weather. Some of us played frisbee, spurred on by Tyron Surmon, one of our committee members. I took photos, but because of the lightning-fast jumping and ducking, they were too out of focus (and perhaps too undignified) to show.

We took a break, and then Oscar Hughes gave his talk, “English and Esperanto, two international languages?”. It clarified the position of English in relation to politics and economics, and then illustrated the differences between it and Esperanto. For example, Esperanto doesn’t have a fixed ‘core’ of countries where it is spoken, unlike English, and it has spread not through economic pressure but through the enthusiasm and ideals of its speakers. The talk gave a concise run-down of the facts, with clear images and diagrams, leading into an interesting discussion afterwards. 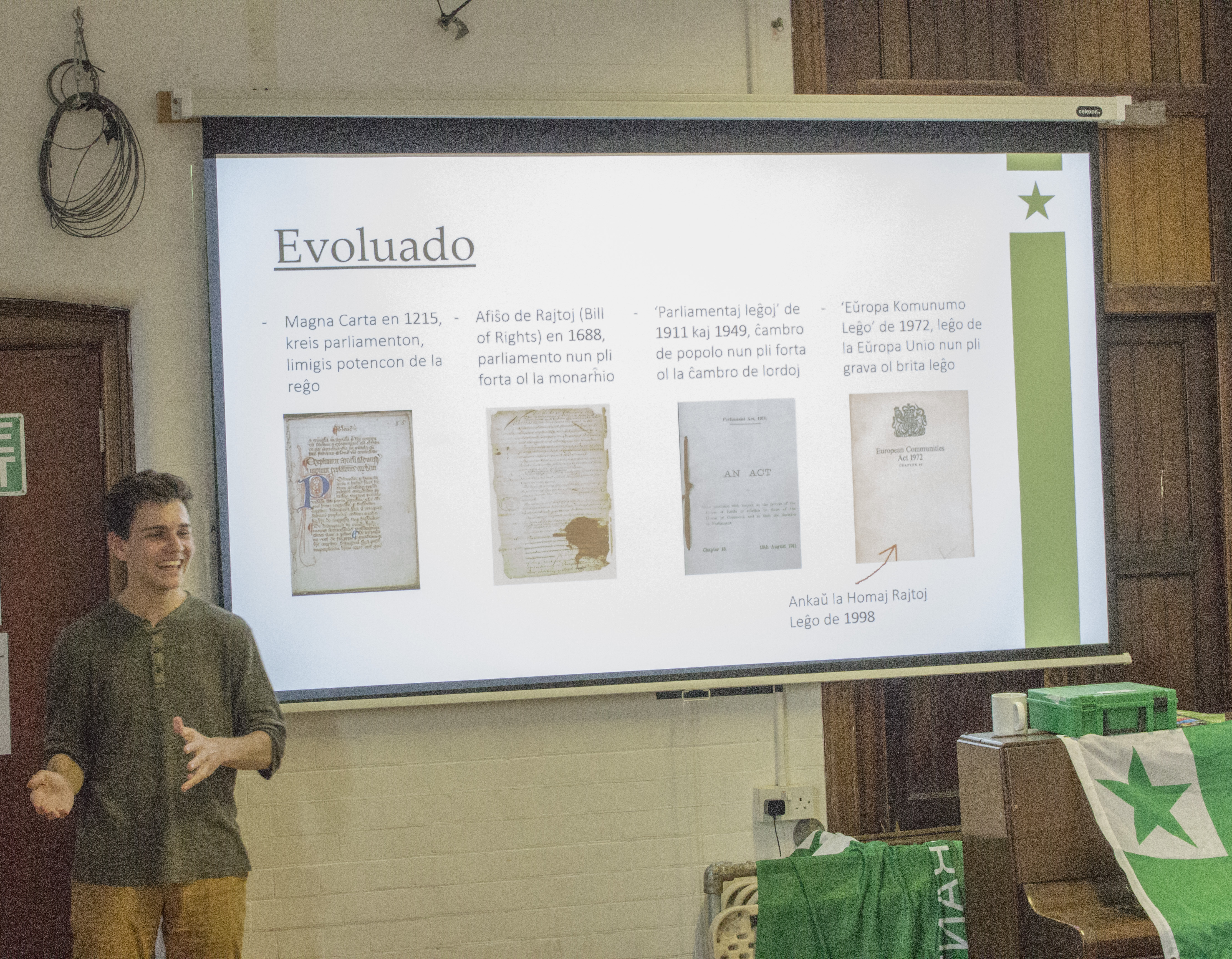 Then Tyron Surmon gave his talk, “The British Constitution and why it’s interesting”. Following the thread of Brexit, Tyron summed up the history and current status of the British constitution, and explained why it is unique and complex in relation to the constitutions of other countries. I learned lots, for example that British law is often based on ‘convention’, i.e. norms and customs which are not explicitly stated in the legislature itself.

The session ended with JEB’s annual general meeting. We discussed several topics: what we’ve been up to over the past year, our goals and aspirations for the association, and what people want from us. I’ve summarised the main points below: 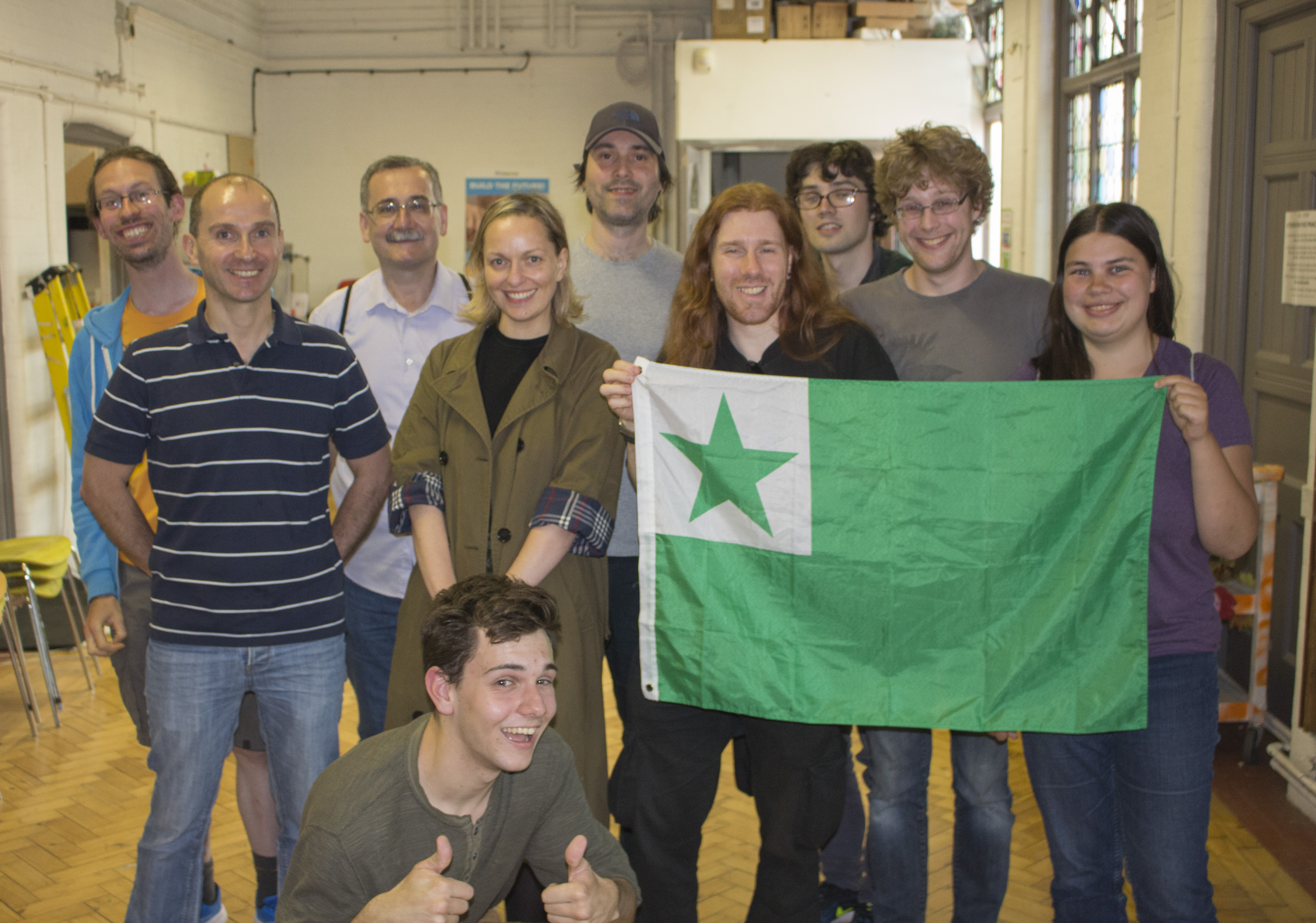 Photo of us in Rothbury Hall

We also briefly explained our new constitution to the members of the association. You can read the full constitution here.

That evening we went to the pub The Gate Clock for a well earned meal and round of drinks. We became very animated, and sang a rousing rendition of Dek Bovinoj (‘Ten Cows’ – a children’s song in Esperanto that’s become somewhat of a meme), earning a round of applause from the other pub-goers – all in all, a great day!

The event finished on Sunday, when Anna Löwenstein kindly showed us around the stately home Kenwood House with commentary in Esperanto. It was really nice to also have this cultural aspect to the event, and I’m always surprised how much variety you can find within a short distance in London.

I went home from the event completely ecstatic. I feel like the work that me and Tyron, and our ex-vice-president Sasha Murr, have put into JEB over the past few months has really paid off, and now we have a stronger committee, full of new ideas and energy. Thank you to all who came, and if you weren’t able to, we hope to see you next time!

This site uses Akismet to reduce spam. Learn how your comment data is processed.